You are here: Home » Blog » Homemaking » Composting With Worms 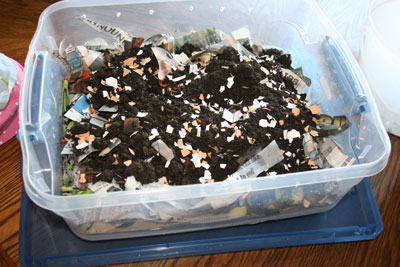 As I've had a few extra days waiting for baby that I didn't anticipate having, I've been getting just a few last minute projects out of the way. One of them was to create a small worm composting box (also known as vermiculture or vermicomposting).

This is a great way to do composting on a small scale, in order to make good use of kitchen scraps (keeping them out of the trash!) and end up with excellent, nutrient-rich compost to add to any house plants or veggies that you've got growing. Because of it's small scale, absolutely anyone can do this, even those in a small apartment!

A friend had recently decided to get rid of her bin, and before she sold it she took out a good handful of worms and set them aside to give to me. I had been wanting to give this a try for quite some time, so I was really excited to take them home and get things set up.

So as not to reinvent the wheel, I am going to direct you to a set of posts that offer an excellent overview of worm composting, including photo tutorials for setting yours up and lots of other great information and tips. Rachel at Small Notebook has been doing it for over a year, and she has posted extensively on it. Thanks Rachel!

A Year of Composting

How to Make a Worm Compost Bin 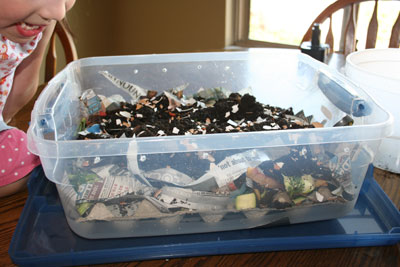 Here's a bit of a side view so you can see how I've set mine up. A large cardboard egg flat on the bottom, lots of strips of newspaper, then a bunch of small veggie scraps (I cut up any large chunks, to make it easier for the worms to break down quickly), the worms, some more veggie scraps including dried and crushed egg shells, and then I added another thin layer of newspaper strips before putting the lid on and sticking it in the cupboard. The blue lid underneath is to catch anything that drips out, as it's important to keep the pile lightly moist (I just sprinkled mine with a small glass of water, and will check it once a week to make sure that it hasn't dried out).

Has anyone else tried worm composting? What do you think of it? Any tips or suggestions?