You are here: Home » Blog » Family Life » What Do You Do When Simplifying Isn’t So Simple? 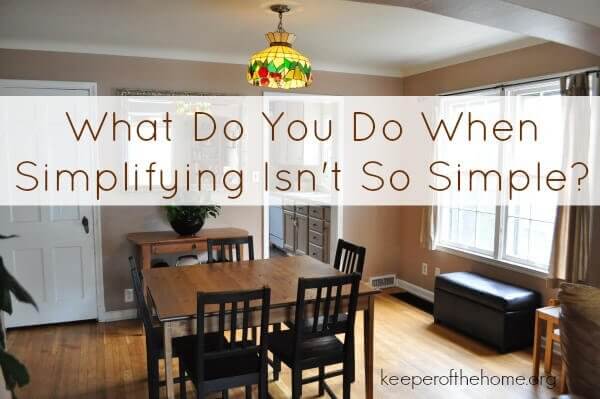 Too many times over the past year my husband and I have looked at each other in exasperation and exclaimed, “TOO MUCH STUFF!”

…our laundry pile has stopped fitting inside the hamper and has, instead, exploded over the top, down the sides, and all over the floor of our room.

…our kids seem to have dumped out every container of toys that they own and then whine and complain when we tell them it’s time to clean up.

…we open a cupboard door in the kitchen and things spill out on top of us when we’re trying to just remove one item.

Maybe you can relate? Has the stuff creeped in to your home, even through your efforts to minimize and simplify? Is it threatening to take over, the way it is at our house? Is it overwhelming you and causing you stress? It is for us!

I’m pretty sure our family is not alone here. Despite the fact that simplifying and minimalism seem to be popular buzz words around the web these days, I can’t help but think that one of the reasons these ideas are so popular is because simple living is really not so simple for many of us.

And yet, that simplified lifestyle is something that is so very appealing.

When our family moved to our current home just over four years ago, we got rid of about half of the stuff that we had at our previous home. We were downsizing and feeling the squeeze of having too much stuff. We said that we wanted to keep our stuff under control and not let it get out of hand the way it had at our previous house.

But that’s definitely easier said than done. Over the past four years we’ve added two more kids to our family, and our little house now feels like it is bursting at the seams.

We do try to be careful about the amount of stuff that we bring into our home, and we also clean out and purge on a regular basis. We have had a garage sale every summer since we moved into this house, and we also regularly sell stuff on Craigslist and Facebook groups, as well as take trips to the thrift store.

Yet, somehow, the stuff just keeps on piling up.

For example, our three kids share a room. Our house is an older home with tiny closets. My husband recently made a really awesome built-in cabinet for our kids’ closet to help store their clothes, but during the change of seasons from spring to summer, and trying to figure out how to fit three kids’ clothing into one small space, things got just a little out of hand.

Let me be real here: this was what our kids’ room looked like for a few weeks. 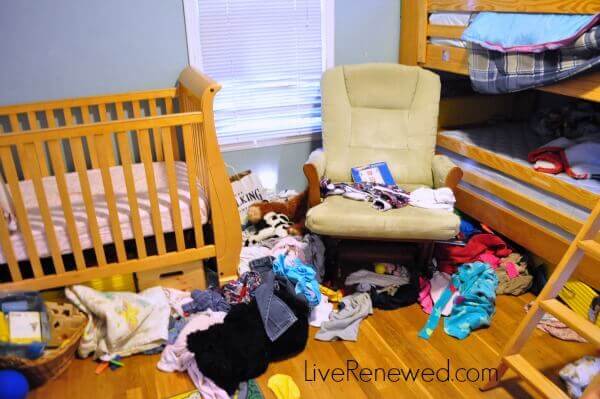 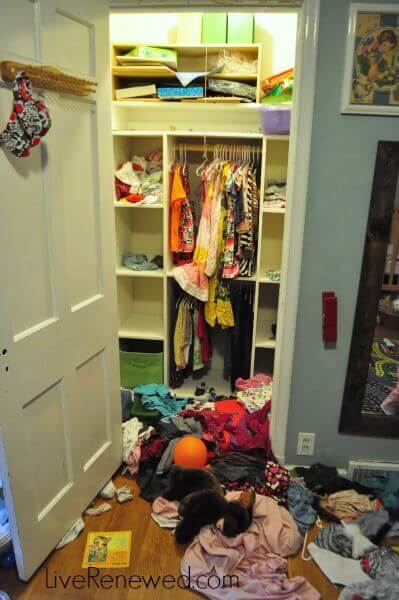 Yikes! That is not pretty and something I’m definitely not proud of. In fact, it’s totally embarrassing. But yes, plain and simple, we had too much stuff in that room!

One of my personal issues is that I am easily overwhelmed. When things look like this, I don’t even know where to start. I think one of the first rules of organizing is just to get everything out, right? So that’s what I ended up doing – I took everything that wasn’t necessary out of the room. Sure, I still need to go through that box and get rid of at least half of the stuff, but at least my kids can live in peace in their room now. 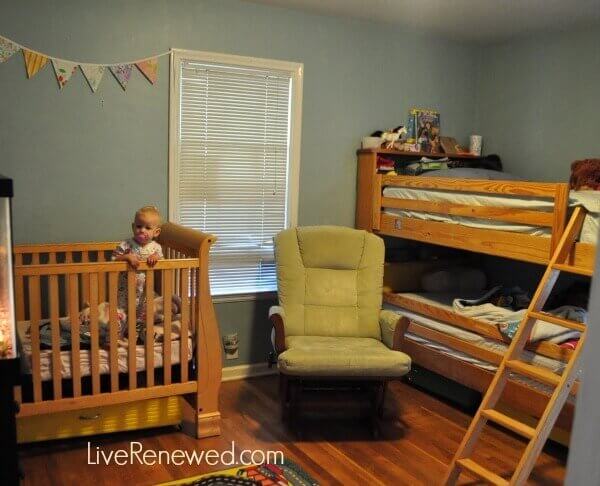 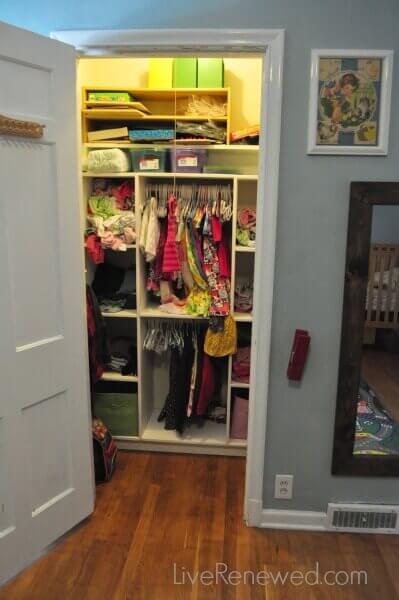 Ahhh! Much better, especially the cute baby! But the kids still have a ton of clothes (especially the baby – that’s her cubby on the top left!). That’s still something we need to work on!

So my husband and I are trying to figure out how to take back control of our stuff, our house, our life, while still maintaining our real life and our real family. Let’s face it: there are some things that are just pretty necessary when you have kids, as much as you might like to get rid of them! (Anyone else ever daydream about throwing all your kids’ toys away?!)

And despite all of the touted benefits of minimalist living, and our true desire to live with less stuff, I still feel like it can be hard to take that initial step and really start getting rid of stuff and making a dent in the amount of stuff that we have. 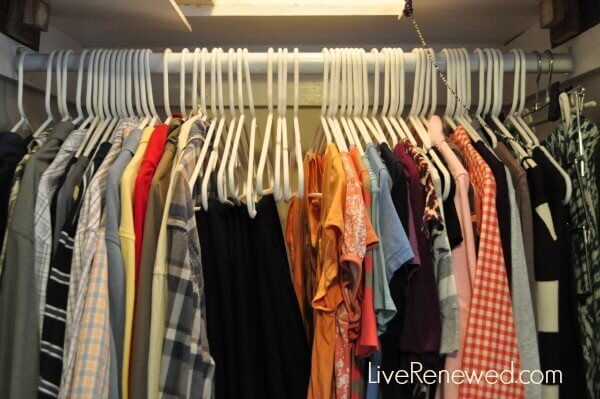 As I mentioned, when you have too much stuff it can easily be overwhelming and you can be unsure of where to even begin getting rid of things. Before we started, my husband and I were discussing in circles where to start getting rid of stuff in our home. We each have different ideas about it.

One of us thinks we need to start in the basement storage room, where we tend to toss stuff that we don’t use on a regular basis, but we don’t really want to get rid of. This person believes that once we have the basement clean and organized we will have a place to move stuff and put stuff away from our regular living space.

So, every once in a while, my hubs will go down there and spend a whole day organizing and putting stuff away, and it will stay nice like that for a while, but then we just add more stuff to the newly-cleared floor!

The other one thinks that we should start with the things that we use and affect us every day – paring down our clothes so that our closet isn’t so stuffed and our laundry doesn’t pile up so high, scaling back the kids toys so they’re not so overwhelming to pick up, clearing out our kitchen cupboards so they’re not bursting and spilling out onto us all the time.

After some healthy debate this past month, my plan won, and we spent some time cleaning out our closet and getting rid of a lot of clothing that we hadn’t worn in a long time! We also removed most of our kids’ toys from their room to an upstairs playroom, but we still need to go through and get rid of more of them.

And we still have lots of areas to work on, like the kids’ clothing, the kitchen cabinets, the hall closet and the bathroom cabinets. Oh, and of course, there’s the basement, too.

But, the progress we have made, even though it may seem small, helps us to see how living with less is really better, and motivates us to keep going on this journey toward simpler living and getting rid of more of our stuff. Now, when I open my closet and see that my clothes have space around them, and I know that I can actually wear everything that’s in there, it makes me want to tackle the hall closet and guest room closet, and every other closet in the house.

When I look at my kids’ room, instead of feeling overwhelmed, I feel empowered to get rid of more stuff so their room can stay that way.

And I want the rest of our house, and our lives, to match the peaceful and uncluttered feeling I get when I walk into their room. It’s contagious!

It may be a long journey for us, and it will probably be something we will continually have to work at to keep the stuff from piling up again. But I really think that it will be worth it. And when we look back, we will be so glad that we made the decision and took the steps to live fuller lives with less stuff.

What about you? Do you long to live a simpler life, but have a hard time actually getting rid of your stuff?

Is minimalism appealing to you, but it feels like the steps to get there are overwhelming? How do you get started with digging out from under the stuff that has accumulated around your home? And how do you keep yourself motivated?

Simple Summer Skin Refreshers
Next Post: Why Are So Many Women Suffering with Thyroid Problems?

We're in the midst of rebuilding. Please forgive our construction dust!