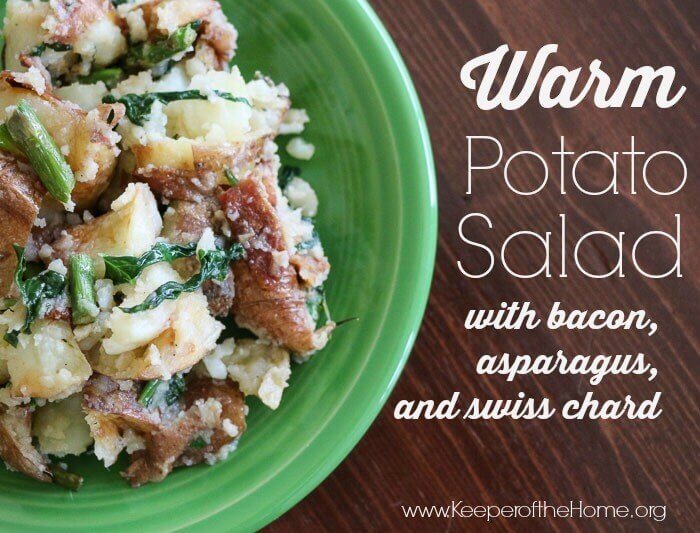 You don’t even understand how good this potato salad is. A month or two ago, Ryan and I were out on a date. We had just discovered that our new home came complete with a very responsible teenage girl living next door. After our year of non-stop togetherness with four kids, being able to go out on date nights sounded divine. We found ourselves at Earl’s, a local restaurant chain we enjoy. Not feeling particularly picky, we ordered the seasonal special, which included a steak, together with a decent coleslaw and a warm potato salad, whatever that was. Well. It was phenomenal. Now, I’m definitely a red meat girl and I love me some steak. But for some reason, I just kept going back to this salad. The skins were browned to perfection, the bits of vegetables and bacon were succulent, the whole thing was just delicious. I knew I had to try to recreate this recipe. A few weeks ago I attempted it for the first time on an evening when Ryan was out. Not wanting to waste any (that’s my excuse and I’m sticking to it), I consumed a rather large portion by my lonesome. I happened to mention what I had made on Facebook and several friends gently hinted that I might have a blog on which I should share such things. Subtle, ladies. Last week, I made it again since Ryan had missed out the first time. There were a few differences the second time around, namely that I substituted spinach for swiss chard (this didn’t really affect it, in my opinion), I used medium potatoes instead of the small nugget ones (again, not a big difference), and I added bacon instead of frying up turkey deli meat (mmm, yes, this was definitely the best change I made). Ryan agreed with me. This was incredible. He thought it was even better than the one we had at Earl’s. I know that the name sounds sounds a bit gourmet and I often shy away from fancy-schmancy recipes myself, but it’s really so simple to make, and not fussy at all. My 2-year-old liked it and the 4-year-old cleaned off her plate, so it’s definitely kid friendly as well. 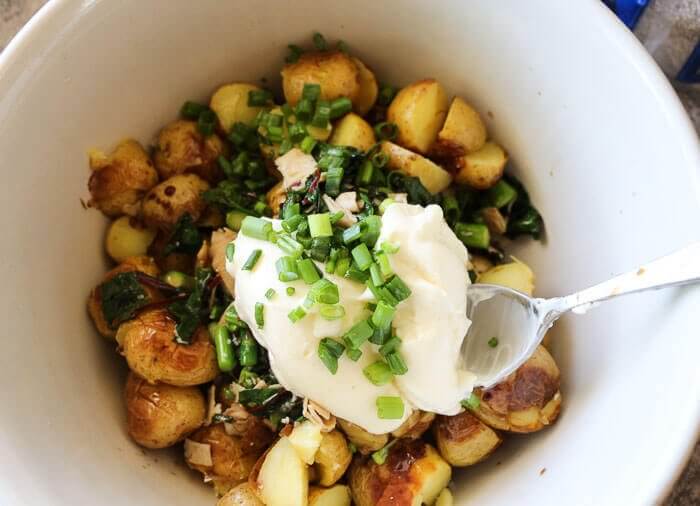 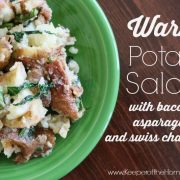 That’s it. Serve while still warm. Though not quite as good, this salad still tastes great as cold leftovers the next day, if you actually have any left over. Enjoy! 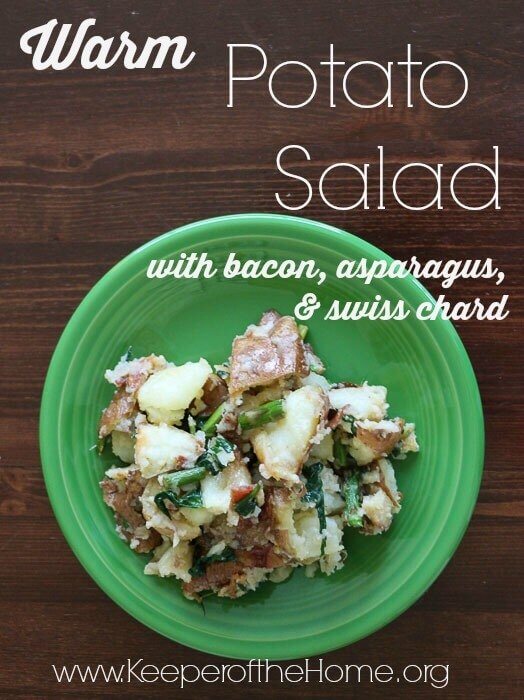 This post is sponsored by Plan To Eat. If you know that you need to make strides towards regular meal planning and you’re looking for a tool to help you do it, I highly recommend that you check out Plan To Eat’s tour (so that you can see what it’s all about) and then sign up for a free 30-day trial to see how it would work for you! Plan To Eat was born from a desire to eat real food — great food — prepared at home, together as a family. Plan to Eat is an online menu planner that uses your recipes, scheduled for the days you want them, automatically generating your grocery list, organized the way you like to shop. Eat well. Eat together.

Risks and Benefits of Sun Exposure {+ A Roundup of 5 Homemade Sunscreens}
Next Post: Growing and Using Fresh Mint