You are here: Home » Blog » Homemaking » The State of My Garden So Far (Challenges, Mistakes, Pests and All) 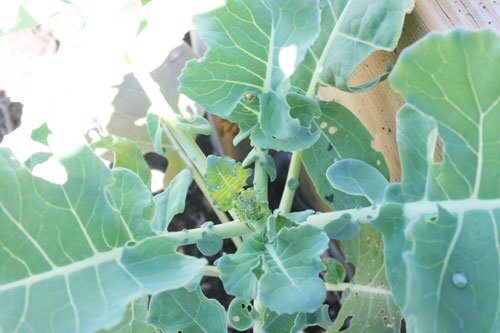 Challenges or not, I couldn’t give up gardening if I tried. Watching my plants grow, from a tiny seed into delicious food is just so rewarding (like this brand new broccoli head above, which we’ll be eating in a another week or two).

This marks our first full summer in our current home, and so far, the garden hasn’t been all I had hoped that it would be. We built garden boxes in the early spring (well, my brother-in-law built them) and then filled them with a truck load of dirt from a local nursery. The boxes are fantastic, nice and deep, with the option to remove the top layers and create extra boxes one day if I want to.

The first issue has been with the soil. I naively (having never purchased soil before, but always just working to amend what was in the ground) assumed that the soil would have a decent amount of nutrients and fertility already, and need only the regular fertilizing that I usually do throughout the summer. From the stunted growth, insect issues and sometimes obvious nutrient deficiencies, I was definitely wrong.

Now, I am playing catch-up with soil that is already thoroughly planted up, as I try to work in organic fertilizers, and add compost or manure when I’m able. It’s not ideal. It takes time for the microbes in the soil to properly break down fertilizers and make the nutrients available to plants. This fall, I will have to really build up the soil in preparation for a better season next year. 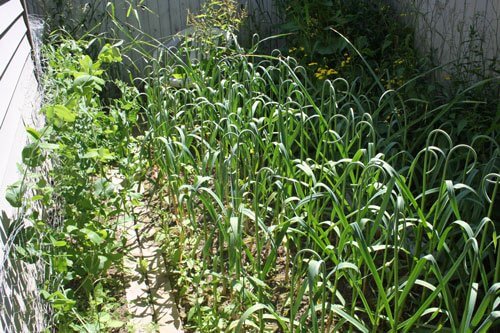 Some things are growing nonetheless. The peas on the left (after a very slow start, they’ve finally taken off and are producing well), the garlic I planted in the fall looks amazing and is about ready to be harvested, and the weeds, well, they’re abundant. Part of the garden back here doesn’t get enough sun to grow anything except weeds. 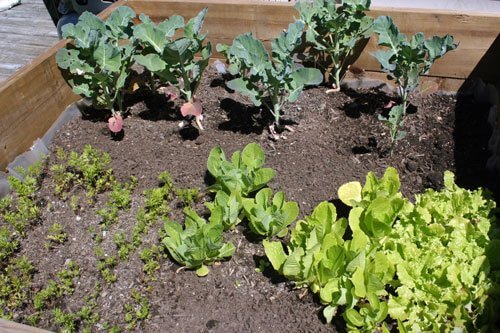 I mistakenly judged the amount of sunshine that my five boxes would receive. This box and the one next to it probably receive more sunshine than any other, although I initially thought they would receive less, and so I used them for my cooler-weather vegetables (lettuce, spinach, broccoli, cauliflower, cabbage, carrots, beets, kale). Next year I’ll know better.

I’m trying to really maximize my space. That empty row between the broccoli, and then the carrots and lettuce, now has beet seeds in it, as does that empty square up at the front. 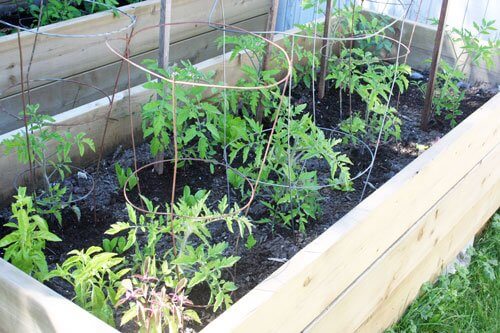 It may be difficult to see in this picture of mostly tomatoes, but in between the large plants, I’ve planted lettuce seeds here and there. The goal was to use up every bit of precious space available, as well as to capture the shade that the tomatoes would provide for the lettuce later in the summer. There’s also some basil tucked in on the end.

I am proud to say that I did have one huge victory this summer so far. Right before I left for the Philippines, my tomato seedlings were in the ground, but beginning to show definite signs of either disease or serious nutrient deficiency. I was unsure of what to do, but since I was about to leave, I just gave it my best shot, thinking I could always break down and buy new seedlings if mine were dead upon my return.

I ruthlessly cut away every branch and leaf that didn’t look healthy (so hard to do). Then I dug fertilizer and compost in around each plant, in a circle around the base (but not touching the plant). I watered the fertilizer in well, packed up for my trip, and hoped for the best. Well, my efforts were successful! When I came home, everything was bright green again, looking healthy, and starting to grow new branches in place of what I had cut off. Yes! 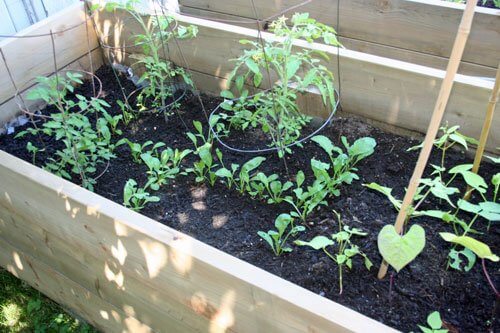 These two long boxes are beside each other, and they’re both having some of the same issues (not to mention that they are shadier than I expected when I planned to put tomatoes, cucumbers and beans in this space). Definitely slow growth like the rest of the garden, but also another mysterious issue that has me perplexed.

It seems that there is some sort of cucumber-loving insect in these boxes, and pretty much every time a new seedling pops its pretty green head up, it is eaten within a day or two. Some of them are even eaten below ground as soon as they sprout. Other plants are being nibbled on, like the radishes (again, planted in rows between tomatoes) and the beans, but nothing as badly as the cucumbers. Does anyone have a clue what’s going on with my poor cukes? 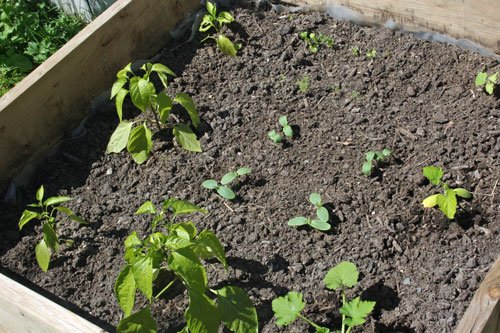 My fifth box, another sunny one. This has 4 red mini-bell peppers (I’ve opted for mini peppers because of their significantly shorter growing season, which suits our climate better than most peppers), two summer squash (one zucchini and one scallop squash), as well as 6 cucumbers (which I will grow vertically up poles) and then some (still small) dill and cilantro plants.

And yes, I do intend to weed out the weaker 4 of the 8 cucumber seedlings in the middle. With my cucumber issues so far this summer, I wasn’t taking any chances! 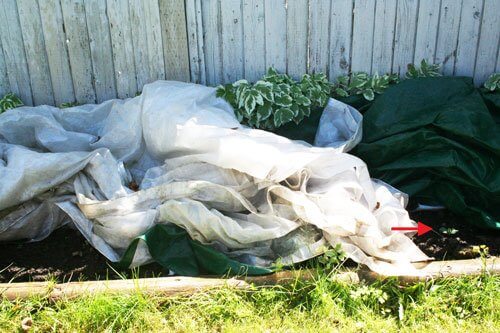 Lastly, the side garden, which was planted with something decorative and leafy long before we moved here. Last summer I tried to just dig up as much of the (very deeply rooted and invasive) plants so that I could put in some tomatoes. They did grow, but it was pretty mediocre. I think they had so much root/nutrient competition that they couldn’t flourish.

This summer I have been attempting to smother and kill off the original plants with these big sheets of plastic. Towards the front left and right you can see two openings, where I have put seeds, for Sugar Baby watermelons, and Butternut squash. The red arrow is pointing to the Butternut seedling that finally came up (second or maybe third attempt?), but the watermelon seeds still refuse to sprout.

I am contemplating putting in some blueberry or strawberry plants for next year instead, after leaving the garden entirely covered by plastic until the weeds (ahem, pretty plants) are gone. Any other ideas for me?

And that is the state of my garden… how is your garden doing? What challenges have you worked to overcome this year?

Cool Meal Ideas for Hot Days
Next Post: Planning What to Preserve