You are here: Home » Blog » Family Life » Living with a minimal wardrobe (and loving it) 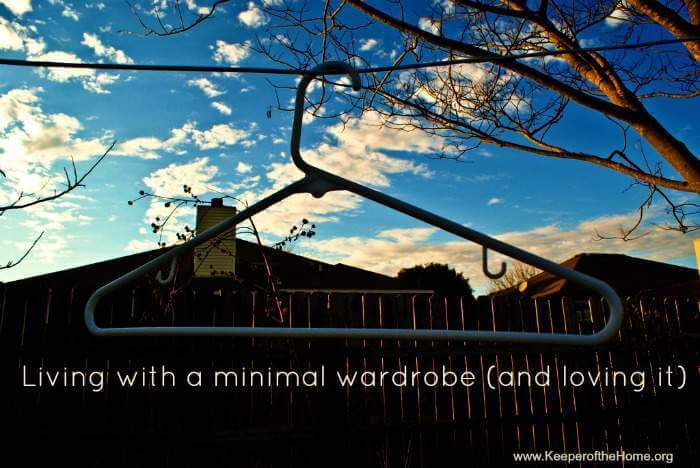 I have two pairs of pants.

One black, one dark blue. When one gets dirty, I throw it in the wash and wear the other. If they both get dirty, I can pull out one of my two skirts, or wear a pair of pajama pants around the house until the load of laundry is finished.

A few years ago, that would have been incomprehensible. Who has only two pairs of pants? And why would you even want to?

When I was younger, and especially back when we couldn’t afford to buy much at all, I held on to clothing tightly. I wanted to have more options, more outfits. For whatever reason, more seemed better than less. Like it would make up for not liking much of what I had, or wishing for something different.

And so my wardrobe, though never huge by any means, was larger than it needed to be… with shirts I sort of liked, and pants that mostly fit, and colors I looked all right in, and skirts that I would wear once in a while.

My buying decisions came down to price, and the temporary thrill of having something new. Rather than waiting for something just the right style and fit (even if it meant I ultimately had less in my closet), I bought things because they were a “good deal”.

But most of the time, they weren’t.

Last year, while traveling and living out of backpacks, I was forced to pare down my wardrobe like never before.

Oh sure, I’ve decluttered, and tried to clear out my closet every year or two. It would help a little, but honestly, it never made enough of a difference.

So you can imagine the shock it was to go from a semi-full closet, to this: 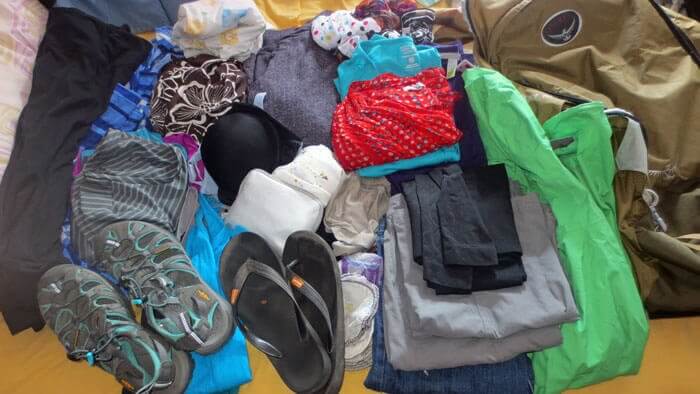 Getting dressed in the mornings became a cinch because it entailed choosing clothing that was a) appropriate for the weather and b) clean. That didn’t leave much room for picking and choosing. Many days, my outfit was determined for me, like it or not.

To be real, I definitely had days where I was sick of my meager wardrobe, eager for something fresh and pretty to wear. Particularly when we were in cities, like Buenos Aires or Paris, where I gazed a bit longingly at the beautiful women around me, so classy and feminine and confident with their style. It was hard that my slim pickings were primarily practical travel clothes. If you’re going to wear things repeatedly, it helps if they’re cute.

At the same time, it was so freeing.

I couldn’t get caught up in deliberating over this outfit or that sweater or which pair of pants looked better. It was all basically mix and match, and getting dressed became an effortless part of my morning routine.

I couldn’t hoard or build up my wardrobe, because when sitting on my backpack and having my husband help me yank that zipper shut failed to do the trick, it was time to purge. And so I did, multiple times throughout the year. If something was looking ratty, wasn’t serving the purposes of where we were or the weather that we were in (unless it was a high quality piece worth holding on to), I discarded as necessary.

I couldn’t make what I wore a bigger deal than it needed to be.

Since coming back home, my husband and I have made a deal with each other. To buy less clothes, but higher quality. And the cardinal rule… if we don’t love it, we don’t buy it.

I’ve written before that:

They say that most of us wear 20 percent of the clothing we own, 80 percent of the time. Which means, there’s no point in holding on to something that you just sort-of, kinda like.

I know it’s tempting when you feel you don’t have enough to wear, but the reality is that if you don’t feel good in it, you won’t wear it anyway.

It’s true. So we’ve decided we’d rather just have 20% wardrobes. Why have more? 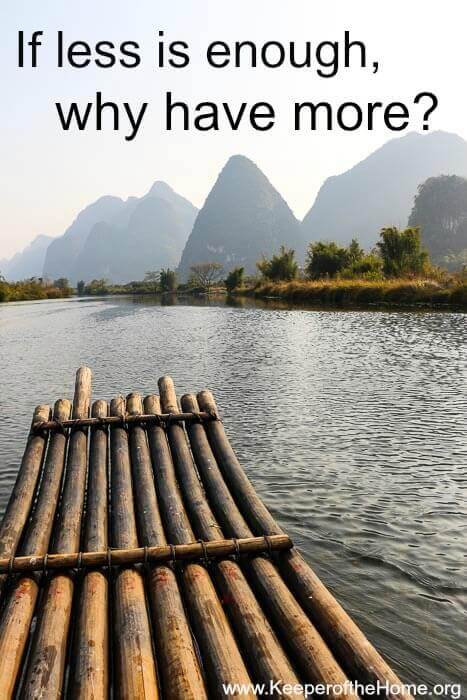 When we first got back, all our previous clothes had been packed away, and were buried in our storage. We had no choice but to go shopping for a few new duds to tide us over until we could move in to a house and unpack.

Between what I bought, and then what I unpacked a couple months later, I’ve already realized that I have more than I want. Well, except for pants. I think I’ll stick with two.

But shirts and sweaters, not so much. I feel like I have twice as many as I want (maybe 30 items in total, for both summer and winter), so I’m giving them each a chance, wearing them for a day, then I determine if they get hung up again, or added to the “give” pile. It’s growing quickly, and that makes me happy, as I pare back down to what feels like a manageable, minimal wardrobe once again.

Soon, I’ll be down to what I wear on a regular basis, and what I feel best in. I want to be able to wake up in the morning and make simple choices out of a handful of favorites.

I’m certainly not the only one that enjoys the benefits of a half-empty closet. Tsh shared the other day on Facebook how light she felt after cleaning out her closet. Crystal has shared her her own minimalist wardrobe and tips for having one yourself.

What about you? Is less more for you when it comes to clothes? Or would you like it to be?

Supercharge Your Nutrition with Swiss Chard
Next Post: Homemade Custard Ice Cream {Without a Machine}