You are here: Home » Blog » Homemaking » Vitamin D Has Quite a History

Does Vitamin D history matter? As it turns out, it does, and here’s a bit about it. It’s intriguing and also important for our health.

History fascinates me and the history of vitamin D isn’t disappointing.

Any time I have a question about food, health, or why my third toe is bigger than my second, I go straight to Google! Google knows everything, right? I tell my kids all the time how lucky they are that they don’t have to spend hours at the library digging in those little card drawers to find answers to their questions. Remember those? Nowadays it’s all at our finger tips!

So as I started this journey with my eyes now staring wide at my body’s empty vitamin D tank, I wanted to know more about vitamin D.

Remember how last week I asked how Superman got his powers? Stay tuned to the end, because, believe it or not, it’s tied in to vitamin D!

So what do we know about vitamin D?

Did you know that in ancient times the sun was worshipped as a god? In my research I came across several mentions of this. I vaguely remember that I studied it at some point in school, but quite frankly, I never really paid much attention and I never took it seriously. I thought they were just stories.

Yeah, we joke a little about our friends who are always at the pool or the beach, calling them sun worshippers. But why did people really worship the sun? It was recorded that in early times the sun ‘god’, called Helios by some, was worshipped for the widely known therapeutic healing properties that sunlight therapy provided.

In the book, Dark Deception, Dr. Mercola explains that the benefits of sun exposure on heart health was reported in the time of ancient Egyptian Ramses. Mercola also states that the Greek physician Antyllus recorded that sun therapy strengthens muscles and melts fat. Hyppocrates, the father of western medicine, is known to have prescribed sunlight therapy, also known as heliotherapy.

(If you want to read more of the history, I’ve included links at the end.)

So if it was so great that it was actually worshipped for healing, then what happened?

Well, to make a long story short, because of actual sun worshipping, Christians tried to put an end to the practice of sun bathing to try and rid worship to a false god. For hundreds of years it was thought of as a sin and frowned upon.

However, in the 1700’s and 1800’s, light therapy started to once again be used for healing. Scientific studies were now showing how sunlight could kill bacteria and physicians were relieving rickets and scurvy with sun exposure.

Since the late 1800’s it was one of the key treatments for tuberculosis. Diabetes, cancer of the colon, breast cancer, and many more types of cancers benefit greatly from the sun. Heliotherapy is still a popular therapy today for things like Seasonal Affective Disorder and many skin ailments like psoriasis and eczema, acne, and jaundice.

I experienced this when my own firstborn son had jaundice. I was given instructions by my midwife to place him in indirect sunlight for a short amount of time each day to help break down the bilirubin that his little body was having trouble getting rid of.

In the early 1900’s, around the time light therapy was gaining a good reputation again, the dawn of antibiotics took over when penicillin was discovered by Alexander Fleming and used to quickly treat infections such as for military use during the war. [source]

Also around the same time, synthetic sunscreen came to the market. One of the earliest produced also for military who were experiencing overexposure in the tropics of the Pacific during WWII. Another sunscreen was developed by a Swiss chemist in the 1940’s who burned due to overexposure. [source]

With the advent of antibiotics and the new concern over sun exposure, it seems the knowledge gained by those early scientists was forgotten by conventional medical practices. It is now found mostly in history and old medical journals or with naturopathic physicians, from what I have experienced myself.

Now that we know some history, let’s take a look at what vitamin D actually is.

Would it be weird if I still watched Magic School Bus now that my kids are teenagers? My kids would sure think so! (But I know you, dear friend, completely understand!) 🙂

Vitamin D is the only vitamin your body can make. It’s made when the sun’s rays touch your skin. A hormone and not a vitamin, that is converted by your liver and kidneys into a usable form. [source]

Vitamin D is also referred to as calciferol due to its role in managing calcium and phosphorus levels in the bloodstream. In fact when you are taking a vitamin D supplement it is actually referred to as a hormone therapy.

It is true that we can get a small amount of vitamin D from certain foods like fish, but the vast majority of our vitamin D comes from the sun. This can be a challenge for many, like me, who live in areas where it is difficult to get adequate amounts of sunshine (especially in the winter!).

Why is it so hard to get vitamin D? What exactly does vitamin D do for our bodies? Now that we know the story behind vitamin D, next week I’ll share with you what I have learned about the benefits and how I’m getting my daily dose.

I’m starting to think of myself as a giant solar battery like Superman and I’m slowly gaining back those mom superpowers!

And as for where Superman gets his powers, here you go:

Superman gets the majority of his powers from Earth’s yellow star, effectively making him a giant solar battery; when he uses Super Flare he expels that stored up energy in the form of a giant blast. [source]

How do you get your vitamin D? And what mom superpowers do you wish you had? 🙂 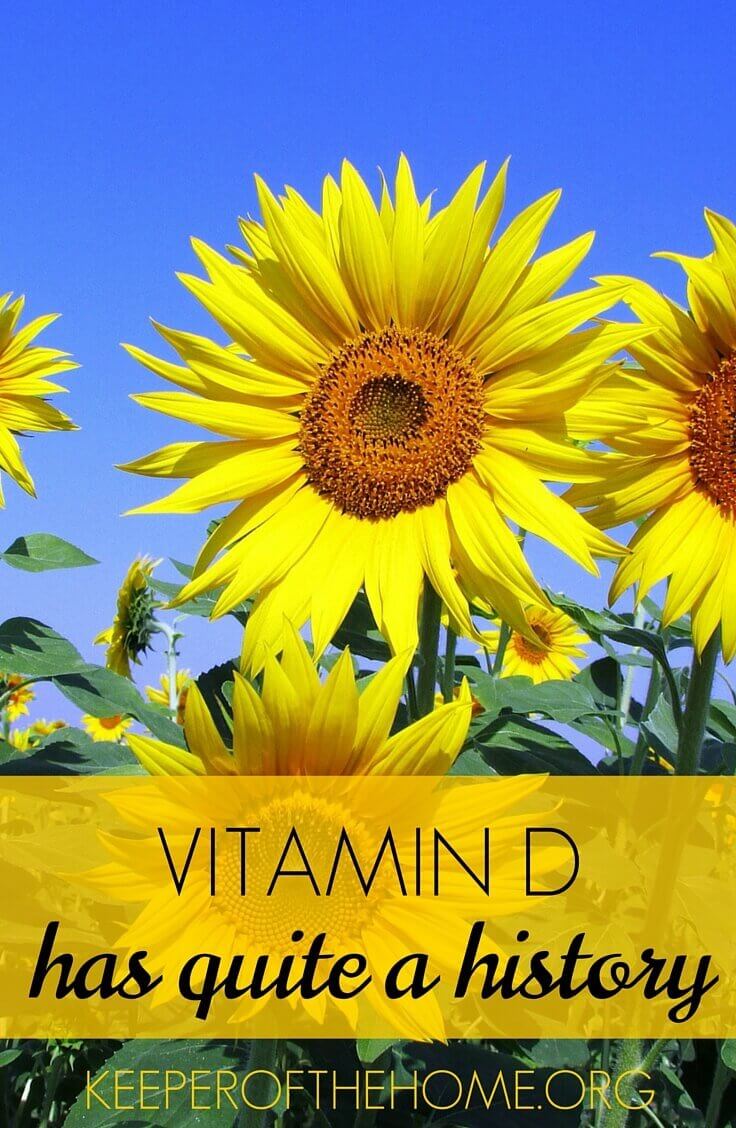 If you’re interested in more history and some science, here’s a collection of links I found and used in this post: