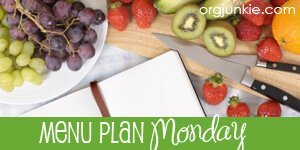 I had already prepared my menu plan last Thursday, but yesterday I realized I would have to rearrange it a bit. We went to an heirloom/organic seed event at a local garden, and I spent what little grocery money I had left for the month getting seeds! I’m thrilled about the seeds, but had to make some quick changes to make my menu work without going shopping until the weekend (the start of the next budget).

Monday: Roast chicken with millet and asparagus (I wasn’t planning to cook a whole chicken this week, but I’m all out of broth and have no bones in the freezer, so I decided to go for it).

Tuesday: Big Spicy Meatballs (substituting moose for beef/pork, and goat’s cheese for parmesan, and no cheese topping, and egg replacer for eggs- sheesh!), with Garlic Pasta (using brown rice pasta- a minor cheat, but I had to be creative without going shopping!), and a green salad

Wednesday: No dinner- at a church event

Thursday: Thai chicken stir fry (moved from last week- it got switched to
Saturday, and then we were in the city and ended up eating there
instead of coming home to make dinner, so now it’s been switched again!)

Friday: Dill Pot Roast (using moose, and hat tip to Org Junkie for the recipe), with carrots, corn and quinoa (instead of rice, as in the recipe), and I will make a gravy instead of the sour cream sauce (no dairy).

Saturday: Probably at a friend’s house for dinner, but if not I’ll make Quesadillas (sprouted corn tortillas), using black beans, peppers and feta (for me) or cheddar (for hubby and daughter). If we do go out for dinner, we’ll eat this for dinner on Sunday.

Sunday: Lunch with friends- Scotch Broth (recipe below), homemade buns and green salad (plus fruit crumble for dessert??).
Dinner- either Quesadillas, or leftovers or sandwiches. Sunday are supposed to be my easy day!

One of my recent, favorite soup recipes. It is so comforting and flavorful, plus it’s made with seasonal root veggies- just a perfect winter soup! This is my slight variation of this recipe (it originally calls for neck of lamb, which I’ve never used).

Previous Post: « At least I ’ m not allergic to water!
Next Post: A question for all of you… »