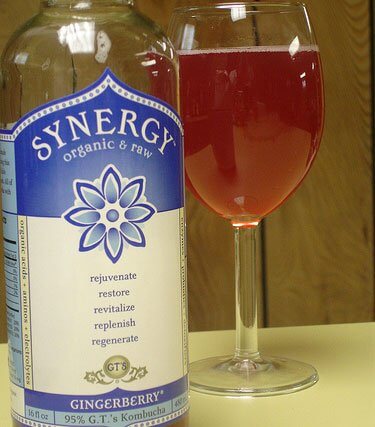 A couple years ago when someone first told me about WAP (Weston A. Price), I joined an online group. People there kept talking about kombucha. It sounded weird! I had no idea what it was, or why anyone would want to drink it.  They kept talking about it as this special, prized drink that they wanted their children to have, and debating its merits. It wasn’t until almost a year ago (quite awhile after I first heard of it!) that I really tried it — and liked it.

Today I brew about 6 gallons of the stuff every two weeks. Yes, we go through that much, and could honestly go through a lot more, if I had the jars to do it. But what is it? And why do you want to drink it?

Kombucha is actually a traditional, femented Chinese tea. Its exact origins are actually unknown, although there are various theories on where it came from and how. There’s one story about how a man was really trying to make a type of vinegar, but some sort of “contamination” got in, and it grew this tough, beige-colored “mushroom” on top. But he loved the resulting drink so much that he continued to brew it, and spread it around.

Today, kombucha has regained popularity among many, including celebrities (there was a bit of a scandal last summer involving Lindsey Lohan, who apparently drinks it and loves it, which resulted in several commercial brands being pulled from store shelves temporarily). It is a dairy-free probiotic drink. It has a sweet-and-sour taste to it, owing to the fact that it is slightly “vinegar-ish.”  It is reputed to contain lots of B vitamins and enzymes; and be able to cleanse the liver; repopulate the gut with good bacteria; improve skin, hair, and nails; improve digestion; and much more.

In our personal experience, we feel much better when we drink it on a regular basis. It’s usually naturally carbonated, so it makes a great low-sugar replacement for soda. It’s a great method of hydration too. It does take some getting used to for some (others like it immediately), and homemade is very different from store-bought. Home brewers can adjust the taste to their liking in a variety of different ways. As I said…we’ve been brewing for about a year and we love it! Except my daughter…she doesn’t like anything that has bubbles in it. My son, however, loves it!

There is a small question about whether or not kombucha contains alcohol, since it is a fermented product (and many go through a second ferment with some fruit juice that’s done in sealed jars, when it can produce some alcohol), but most estimates put the potential alcohol level at less than 0.5%. We don’t drink, but I have no qualms about consuming kombucha, even in large quantities (I’ve had up to 40 oz. in a day before) or giving it to my small children. You may feel as if you are drinking alcohol when you first consume it (warm, happy, buzz-type feeling; but this is caused by the probiotics and enzymes, not alcohol), but every source I’ve found says it is not an alcoholic beverage.

Please be aware this is a small concern with almost any type of fermented food (not just kombucha), since the fermentation does naturally produce a very small amount of alcohol. Trace amounts only. 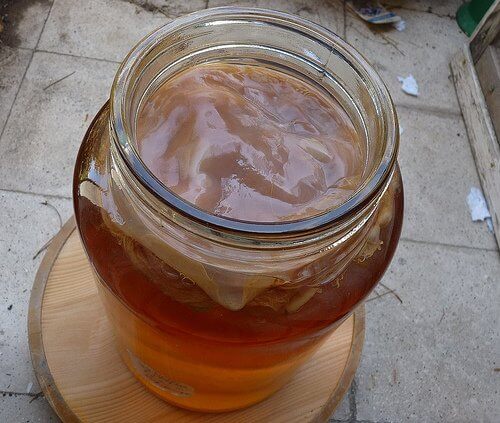 While there are several brands at the store to choose from (my favorite happens to be G.T. Dave’s, the largest), it’s expensive.  A 16-oz. bottle typically runs around $4. Obviously if each person in your home is drinking at least 1 bottle a day, that can add up fast. Who can afford it?!

However, home brewing is very cheap.  A gallon costs me around $0.30 (for plain) or $0.95 (for grape, our favorite). Even with a flavor we’re still talking 7 16-oz. bottles for less than $1! That’s a week’s worth for each person — completely affordable. Even on my newly restricted budget!

To brew, you will need:

**Stephanie’s note: Several of you have asked me where you can get a SCOBY to begin making your own kombucha. One fantastic place that I know of to buy kombucha starter (and many other starter cultures) is Cultures for Health. They sell the starter for $12 and a starter kit for only $16. Another option is craigslist. You can often find someone local to you who is willing to give away or sell their extra SCOBYs. As well, I’ve also heard that you can make your own SCOBY (though I haven’t tried that myself yet). A reader left this link to a tutorial on how to do so.

Okay, this is easy! I’ll outline the procedure very basically here, but you can click through to see a photo tutorial here.

Not too hard, right?

I should note — when we first started brewing, we tried 11 days (this was still in the winter/early spring, so it was cold and dry) and it was too long. 7 or 8 was just about right. In the summer as we got better at brewing and more used to the kombucha, we brewed usually 11 – 12 days, with an additional 2 days on the counter (bottled). This winter, we needed 16 – 18 days initially and 4 in the second ferment! It varies entirely depending on the container you use (a larger surface area brews faster and is more carbonated than a tall, skinny jar with less surface area), the temperature and humidity levels, and even the age of your SCOBY. Don’t let that scare you, though. Your first few batches will be drinkable but not perfect, and you’ll learn how you like it as you go along!

If you’re new to this, check out the Kombucha FAQ and Kombucha Brewing Tips and Hints to learn even more about it!

Do you drink kombucha? What’s your favorite way?

For the Love of Sourdough! Starting a Sourdough Adventure
Next Post: Sourdough A to Z eBook Winners »