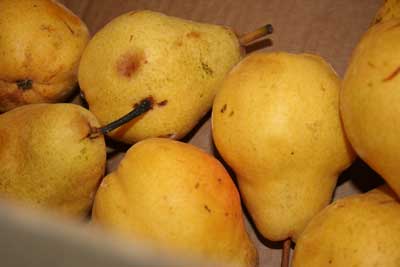 Ripe (very, very ripe) pears waiting to be peeled and cut. I bought a 25 lb box of Bartlett pears several weeks ago and was surprised to come home from a couple days away to discover just how ripe my pears were (since they had still been green the week before)! 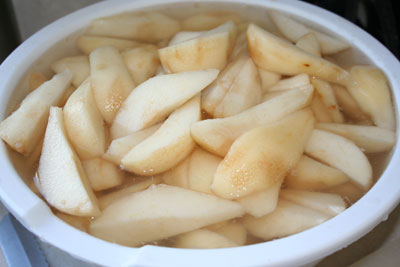 I sprang into action by peeling and cutting, then putting the slices into a bowl of cool water with lemon juice added in to help keep them from browning too much. Peeling and cutting over-ripe pears can be a bit challenging. As I went on, I discovered that it was easiest to peel them whole (holding them very gently), and then core and slice them after. This seemed to prevent them from bruising or smooshing (a very technical term, indeed) as I did it. 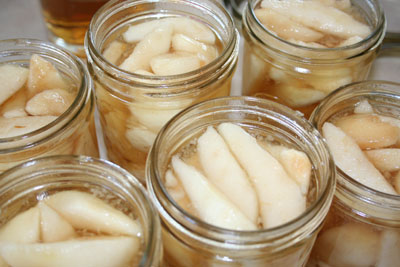 After sanitizing the jars in my dishwasher, I heat them up on a cookie tray in the oven. I usually turn the oven to around 200 F and let them stay there for a good 10 minutes (or until I suddenly remember them!). The point of this is to further sanitize and to have the jars warm enough so that they don’t crack when being put into the hot water in the canner.

I canned my pears in a light syrup. I used a scant 1 cup of sugar (a raw sugar like Rapdura or Sucanat is best) for every 1 litre (quart) of filtered water. I bring the water and sugar to a boil (stirring in the beginning to make sure the sugar dissolves completely). You could also use honey, and would only need about 1/2-3/4 of a cup to achieve the same sweetness of a light syrup.

After filling the clean, hot jars with pear slices, I filled them up with the hot syrup leaving a 1/2 inch of headroom.

Next, I wiped off the jar mouths with a clean cloth, and put sanitized jar lids on top, then screwed on the metal screw tops tightly. To sanitize your lids, bring a small pot of water to a boil. Once it has boiled, turn the water off and add the lids to the hot water (not while it’s still at a rolling boil, as this can ruin the lid’s sealing ability). Let them sit in the hot water for a couple of minutes before removing to put on top of the prepared jars.

Make sure that you begin timing only once the water in the canner is at a rolling boil (it sometimes requires a few minutes with the lid back on after you have added all of the jars inside), and that there is at least 1 to 2 inches of water above the top of each jar to ensure sufficient pressure to seal the jar lids. 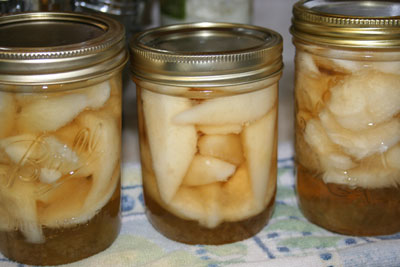 Once the timer has gone off, I carefully remove the hot jars using canning tongs and I set them on several folded kitchen towels on the counter (to protect the counter from the heat). Listen during the next 30 minutes for a “pop” sound, indicating that the jars have sealed. If you’re unsure (and I often miss hearing them seal), go over afterwords and lightly tap on the center of the lid. If it doesn’t move, then it’s already sealed. If it moves up and down or you can feel it push down when you first tap it, then it wasn’t sealed properly. You can re-process these jars in the boiling-water bath once more (do the full 20 or 25 minutes again), and it’s a good idea to take the lid and screw top off and re-tighten them before doing so.

After the jars are completely cooled off, I remove the screw bands to use on other canning projects. This also gives me the chance to see whether there are any without a completed seal. I stick these jars in the fridge and we will use them up within a week or two. The rest I store in my pantry or some other cool, dark place, and they are thoroughly enjoyed throughout the rest of the year!

That’s it! These pears are perfect for adding to a pancake or waffle breakfast, to add to yogurt, or to just put in a bowl and eat plain. My kids and husband adore them!

I also dehydrated some pear slices this year, as well as turning quite a few of them into fruit leather. They’re such a versatile fruit!

What do you like to do with pears when they are ripe and in abundance? Any other questions on the canning process?