Well, I’m nearing the end of week 2 of the diet (although the first week was a bit gradual- this week I tried not to cheat at all). So far, so good. I’ve had a few moments where I just looked at the fridge and sighed.

But overall, I’ve been able to find enough to eat, and most of my dinners have turned out good. The lamb stir-fry was a bit tasteless and needed a LOT of Bragg’s to make it bearable. The Indian style lentils and dumplings with curry sauce were a fairly big bomb (the lentils weren’t too bad, but my husband wouldn’t even touch the dumplings- and that’s a rare thing!).

And there were successes, too! The lentil vegetable pottage was actually quite nice, and I’ll share the recipe below.

I also accidentally made a great soup for lunch the other day! I used the cooking liquid from a leg of lamb that I had done in the crockpot (since I can’t eat beef right now, I splurged a little and am using it as sparingly as possible). I fried up some onions, carrots and celery, then added the lamb liquid for broth, maybe a cup of cooked lamb, a bit of Spike seasoning and salt and pepper, some leftover millet from the fridge (3/4 cup?), and some frozen, organic corn. It was really flavorful and such a perfect lunch for a winter afternoon.

I’ve also been continuing to work on my schedule, which I had truly hoped to have completed on Friday. I probably would have, except that we’ve had sickies in our house all week. My husband was very ill from last Friday up until Tuesday, which is when our daughter developed a fever, and as soon as Abbie’s was gone, our baby got very sick on Thursday (a fever of 102 for much of the day, and he wouldn’t nurse from 8am, until finally he did just before bed, at 7:30 pm.)

I think he was getting quite dehydrated, as he would only take the smallest sips from a cup of water that I kept offering. I ended up going to a health food store to pick up a homeopathic supplement for fevers, which seemed to really help break the fever, which I think was what finally helped him to eat in the evening. And although the fever is gone, the runny nose and cough remain, and he’s just a sick, grumpy little boy (not that I blame him). Thankfully, I think he is truly on the mend now.

All that to say, the schedule is still a work in progress, and I hope to complete it today. 🙂 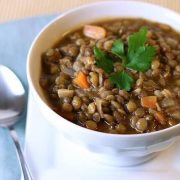 From the Complete Candida Yeast Guidebook

Ever made a pottage before? Share your favorite recipe with me below!

Previous Post: « “Whatever Ya Got” cooking (a frugal way to use what’s in your fridge)
Next Post: Raising healthy eaters- Feeding picky toddlers »