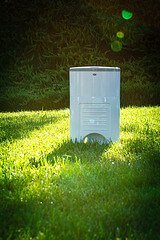 Just a couple of weeks ago, I wrote a few posts about cloth diapering and was asked by a reader about using the dry pail method. It was actually the first time it had occurred to me that it was even an option to not soak my diapers in water!

I’ve been trying it out for the past week and a half, and let me just say, I’m sold!

There is no increased smell (in fact, I would say it’s less smelly than soaking your diapers), the diapers still come clean by using the same method of washing (a cold rinse cycle, followed by a hot wash cycle).

And, the best part for me… I can actually carry the pail without breaking my back! In our current house, the laundry is on the entry level, and the bedrooms are up on the second floor. Because I only wash diapers 2x a week (mostly because it’s just another thing to do and I dislike using all that extra water and energy for such small loads of laundry), my diaper pail was soooo full and heavy! Half the time, I asked my husband to lug it downstairs because I really struggled with it.

Now, the pail is so light and it just makes the whole task of washing diapers feel that much easier.

Previous Post: « At long last- the schedule is finished!
Next Post: Know where you food is coming from!

How to Make Your Own Natural Makeup (with Video)

10 Questions for Expectant Moms to Ask BEFORE the Third Trimester