You are here: Home » Blog » Homemaking » A Creative, Fun and Educational Gift (That Won’t Fill Your House With More Stuff Your Kids Don’t Need) 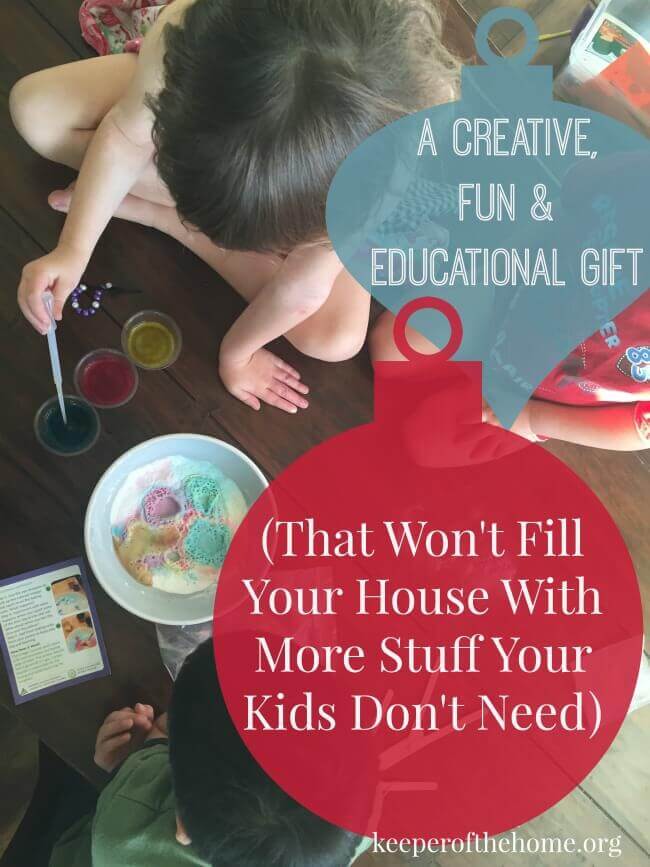 I’m not into giving my kids a lot of stuff. Maybe you’re not either.

As the holidays draw near, I tend to get a little anxious about how much new stuff will make its way into our home. Even more than that, I care about the type of stuff it is. Blinking, battery-operated, Disney-character emblazoned stuff that screams “I’ll entertain you!! (for a week, until you realize what a boring, stupid toy I am)” is not exactly high on my list of desirables.

But stuff that inspires creativity, draws out the artist in my kids, pushes them to learn and challenge themselves, and makes them giggle with the sheer delight of un-commercialized, good old fashioned childish play?

That’s what we want for them.

And that’s why this is one of the most fun and exciting reviews I’ve done in a long time! 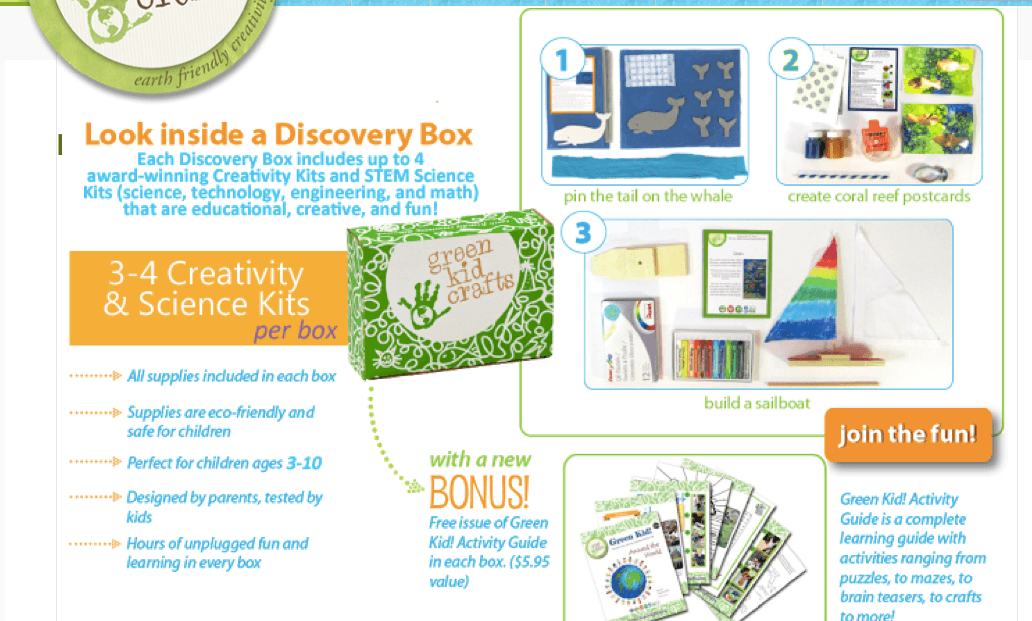 This is a look at the inside of a box that comes to your door when you’re signed up as a month-to-month member. (Actually, you can get boxes even if you aren’t a member, but I’ll get into that more below…)

Each box contains 3 or 4 creativity-inspiring and science-teaching activity packs. Below you can see the three kits that came in our particular box:

Each package comes complete with detailed, step-by-step instructions (with photos!) and sometimes a brief explanation of the science behind all the fun.

It also comes with all of the supplies you’d need to pull this off, other than the basic stuff you’d already have around the house.

For example, the only things that we needed to come up with ourselves to do all three kits were: vinegar, water, measuring spoons, a bowl or plate, a microwave (ok, we didn’t have that, so we used a pot on the stove to melt the soap) and essential oils were mentioned as an optional add-in (we had those, but the finished product would have been just as good without them).

I want to show you what I actually did with the kids and give you some visuals of it all, and then I’ll tell you more about what I thought and how it all works. 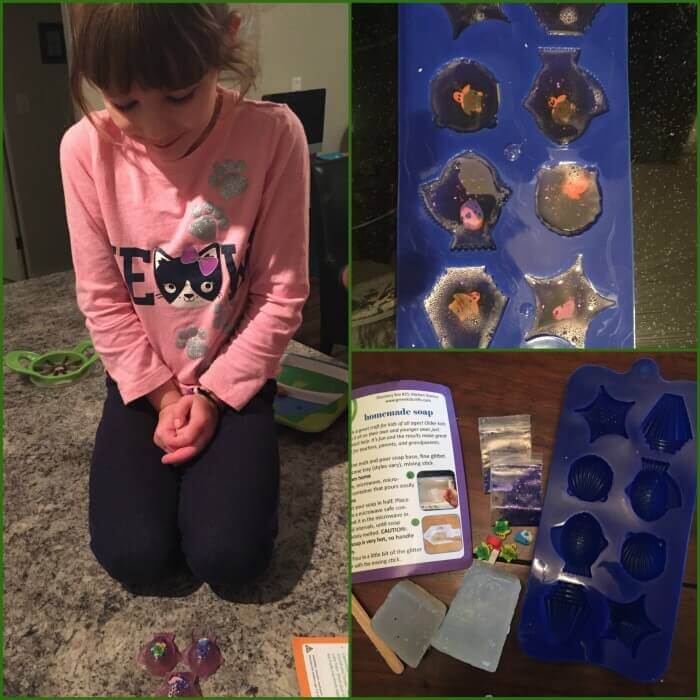 Our first activity, this was SO simple it made me want to cheer.

Thankfully, it also made my kids giddy with excitement! I did it with my 5 and 7 year olds, who thought that adding purple glitter to the soap mix and pouring the soap over mini erasers so that they got trapped inside was just about the coolest thing ever.

Now, I’ll add that we weren’t truly making soap. We were more melting it down, adding fun stuff to it, and then pouring it into molds and letting it harden. For my kids, this was every bit as good. The whole process was very simple to follow, not messy in the slightest, and resulted in happy kids (and a toddler who keeps trying to steal the soap bars so he can do who-knows-what with them – but that’s another story). 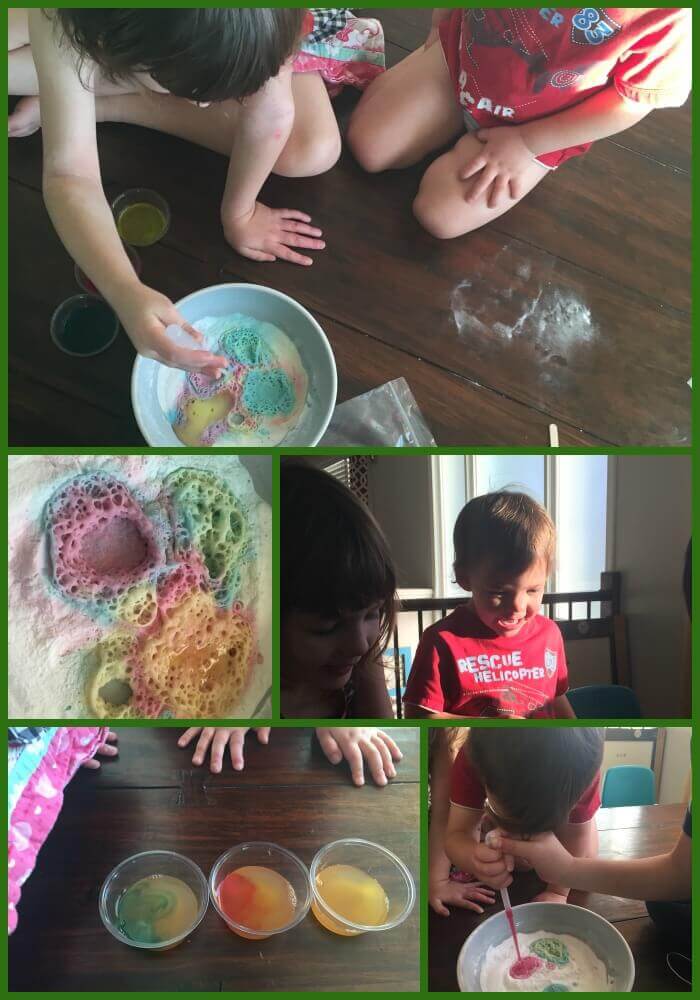 Hands down, our favorite activity!

I was slightly worried as we got going because I’d already promised we could do it and it called for vinegar, which normally isn’t a problem. Except I suddenly realized that I was all out of white vinegar and only had apple cider vinegar (see how our little cups are filled with brownish liquid?).

Guess how grateful I was that my oversight did not screw this project up in the slightest? The eco-friendly dye tablets dissolved perfectly in the apple cider vinegar, delighting the kids as they fizzed and slowly leaked their color into the cup.

But it was once we actually started adding the dyed vinegar to the plateful of baking soda that the fun really began. They used the pipet provided to suck up the colored liquid and squirt it into our bowl. Even the 2 year old got in on the action and as it made fizzy, rainbow “explosions”, all three were literally squealing with joy.

As more and more color got mixed in, it began to resemble the rainbow circles you see in an oil puddle and they were particularly fascinating. Eventually the baking soda was getting so saturated that we sprinkled a little more on to keep the fun going, but a motion was put forward to simply dump the remaining vinegar to make colored puddles, and eventually we had a fizzy, frothy, slowly-turning-brown lake of sludge in our bowl (a 7 year old boy’s dream, I’m telling you). It was fantastic. Best science activity we’ve done in a long time.

We also really enjoyed the science aspect of this activity, discussing how carbon dioxide is formed and where we find examples of it, the difference between acids and bases, and mixing together primary colors to come up with secondary colors. 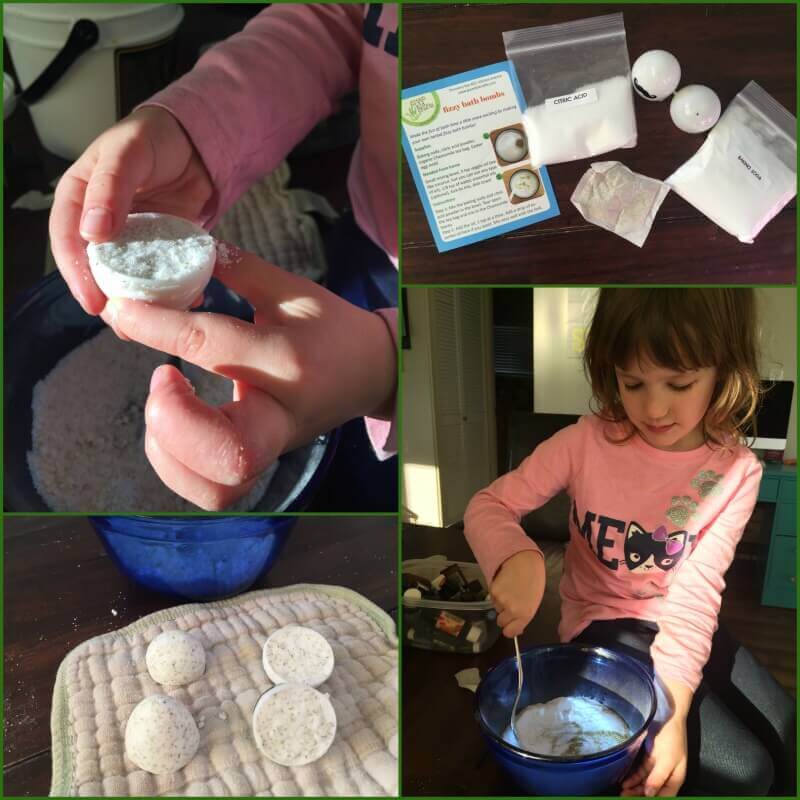 I did this one with just Johanna, my 5 year old, as a special mommy-and-me activity. She’s a complete girly-girl, so the thought of making something special for the bath was right up her alley.

As a naturally-minded mama, I loved that not only were we making bath bombs that would functionally fizz as promised, but the kit included dried chamomile to mix in, and suggested we add a few drops of essential oil (Johanna picked orange).

I worried briefly that the mixture wasn’t wet enough and we’d done something wrong when we began to pack it into the egg-shaped mold (which had a mustache on it – could it be any cuter?). My worries were in vain. Five minutes later, the bath bombs popped out of the molds perfectly, and they’re currently curing on our counter overnight and hardening nicely.

Yet another brilliantly simple but crowd-pleasing activity.

Here’s the thing: I’m not a particularly crafty, science-y mom. I want to be. I’m all about my children doing imaginative, educational activities over movies, video games or toys that entertain them.

Granted, the way we usually achieve that is through plain and simple creative-play toys — dolls, play kitchens with food, car and other vehicles, Lego, toy animals, dress up, free-range art and craft supplies (the non-super-messy kind), etc.

But sometimes my kids want to do something more involved or that they might not have thought of on their own. And as a homeschool mom, I really want that for them, especially in these young years where they’re just so exploratory and curious and soaking up everything around them like a sponge.

I strongly desire to do these kinds of activities with my kids on a regular basis, but the truth is that I rarely do. My husband is a bit better than I am at getting invested in a science project (tossing all math, language arts, and geography out the window in the process… which I’m cool with), but even then, it’s random and sort of depends on which way the wind is blowing and what strikes him or the kids in a particular moment.

When I had these activity packs at the ready, sitting there on my counter, pulling one out felt so easy. I knew I could happily reach for these several times each month and achieve my goal of enhancing my children’s learning and creativity while having a blast with them.

A few things in particular that made me happy:

How does it work?

There are a few different options. You can choose from monthly subscriptions that go month-to-month, or pay upfront for 3, 6 or 12 months at at time (the more months you do, the cheaper each month becomes). If you want some extra supplies because you’re doing it with multiple siblings, you can pay about an extra $8-10 per month to double the amount of crafts you’ll be able to make.

When you choose the subscription option, boxes are shipped out the 1st of each month with a new theme and set of activities, and you also get online access to their additional activities, games, puzzles, etc. that are all centered around that month’s theme (and I did notice the upcoming themes for the next three months… Geography, Rainforest Science, and Safari Science – fun!).

You can also buy specific themed boxes or activity kits. For example, you can choose from Mad Scientist, Green Energy, Dinosaur, Weather Science, Nocturnal Animals and more. These full kits (like what you’d get in a monthly subscription with 3-4 activities) are usually $24.95.

Then there are smaller kits with just one project – Storytelling Kit, Cloud Finder, Sun Prints, Rocket Launchers, Planetarium, etc. each for around $7 or $8.

Many of their kits are specifically STEM kits (science, technology, engineering and mathematics), while others are more discovery or creativity based. If you just look around for a little while, you’ll see that they all look just brilliant and engaging. I seriously know what I’m asking for from any grandparents that haven’t yet purchased Christmas gifts this year, and they may even find a few activity boxes under the tree from Daddy and Mommy!

Later this month we’ll be offering a Green Kid Crafts giveaway, which I know you’ll all be excited to enter, but for now, I’d encourage you to consider these as a way to bring enjoyment into your home without filling up the shelves with stuff your kids don’t need. Check out the monthly subscriptions or their stocking stuffers and holiday boxes!

Disclosure: This post was generously sponsored by Green Kid Crafts, and the projects we completed were sent to us for the purpose of review. All words, images and opinions are my own.