You are here: Home » Blog » Family Life » Our awesome trick for taking away Halloween candy (without a fight)

There are a lot of differing views on how Halloween should or shouldn’t be celebrated, but I think as moms who work hard to prioritize our family’s health, avoiding a bagful of tooth-rotting, immune-system crushing candy is pretty high on the list.

But whether you allow your kids to trick-or-treat, or attend a local fall or harvest carnival, chances are there will be candy. And gobs of it. 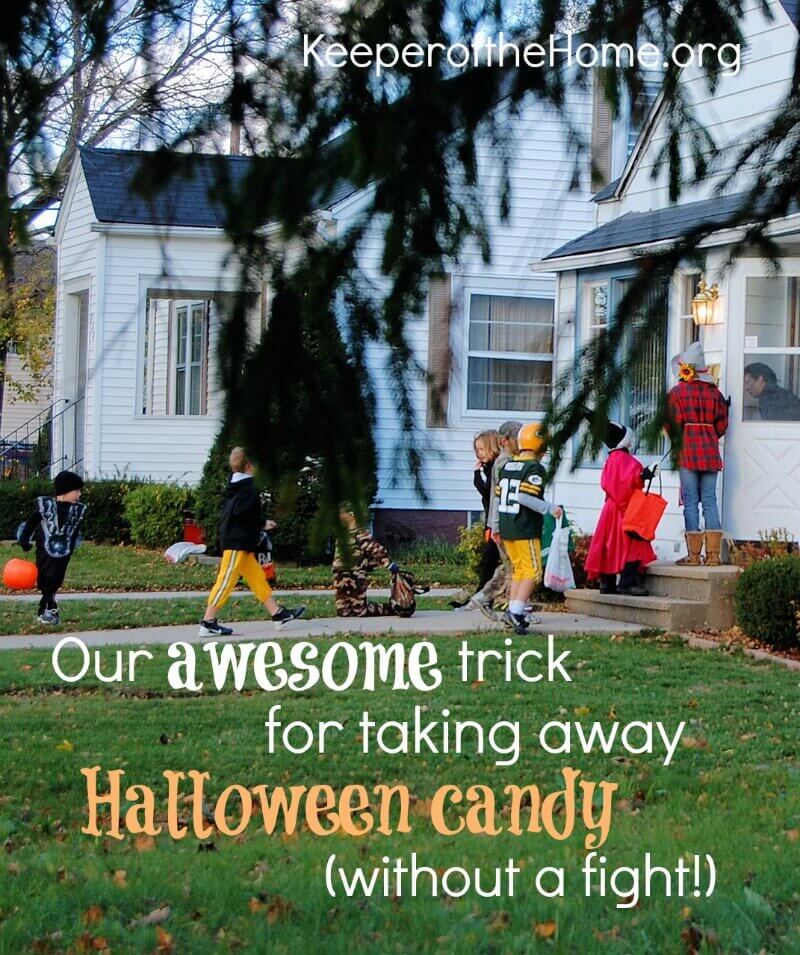 After years of not celebrating the day at all, our family opted last year to let our kids dress up and go trick-or-treating as a special family event with their grandparents and cousins.

It was a riot going through our local thrift store to come up with costumes and so fun to see them out running around with Grandpa and the cousins, breathless, exhilarated and clearly having a blast.

Until my mother-in-law, Janet, came up with a stroke of brilliance.

You see, she’s a toy seller on Amazon and our kids happen to think that her garage/stock room is the coolest place on earth (well, maybe second to where we went on our Kenyan safari… but it’s a close second in their eyes). 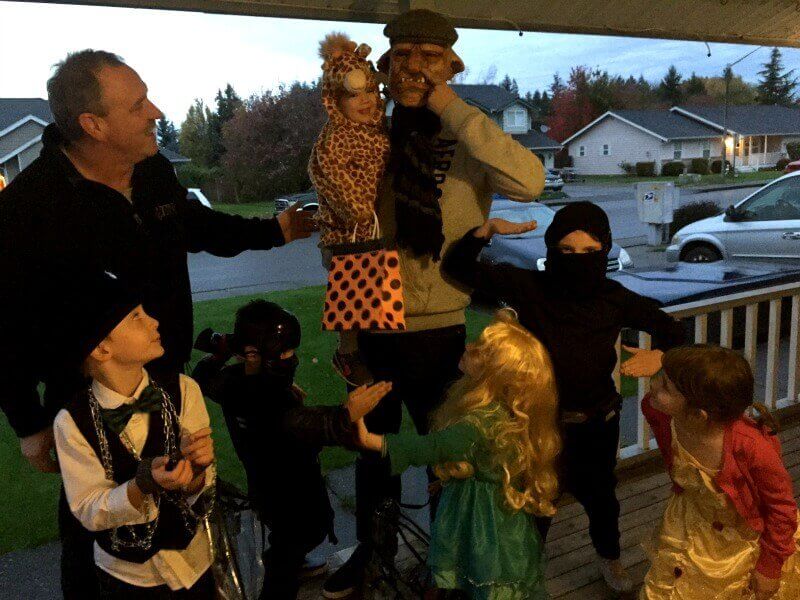 Here’s how she did it:

1. She found a selection of toys, from cheap up to slightly more expensive.

It included things like small cars, figurines, small lego kits, playdoh, etc. It’s great if there are things that your kids are especially fond of that they can earn one at a time, like pieces that go with a set they’re collecting. You want a range of prize sizes and values, so they have a choice to get a bunch of things or save up for a bigger item.

2. Next, she gave each one a value that corresponded to an amount of candy.

Because she has a good scale that she uses for weighing packages, that’s what we used. Other options would be a kitchen or bathroom scale, using a bowl on top to hold the candy (and taking the weight of the bowl into account).

We measured the candy in grams, and each toy was weighed as well. The weight of the toy was generally the price it cost in candy weight (we made exceptions for a few things, but this was the general rule).

You could also do it more simply without a scale, by making items worth a certain number of pieces of candy. Maybe some that are worth 5 each, others worth 10, and maybe some really awesome prizes worth 20 pieces each.

3. Then it was time for the trade.

When our kids burst through the screen door with buckets and pillowcases weighted down with their loot, they went over to the candy station to weigh it. Once they knew how many grams of candy they had, the could choose how to use it based on the price of the prizes.

A few enterprising kids even went back out for another quick round of knocking on doors to earn more for the prizes they wanted most when they realized they fell a little short.

I asked my three big kids their impressions of last year and this is what they said:

Abbie, age 10 ~ “It was good, sort of, because you wouldn’t have let us eat all that candy anyways. So we got something good out of it anyways.”

Caden, age 8 ~ “I thought it was nice, but I didn’t want to trade all my candy. I want to eat some candy. But I love the idea. I like toys, so I liked the deals, and Grandma has really good toys.”

Johanna, age 6  ~ “It was really fun. Trading your candy is better than eating your candy, because sometimes you can get cavities. So that’s why I trade. And because toys are fun. And still getting to eat a little bit of my candy because you let me.” 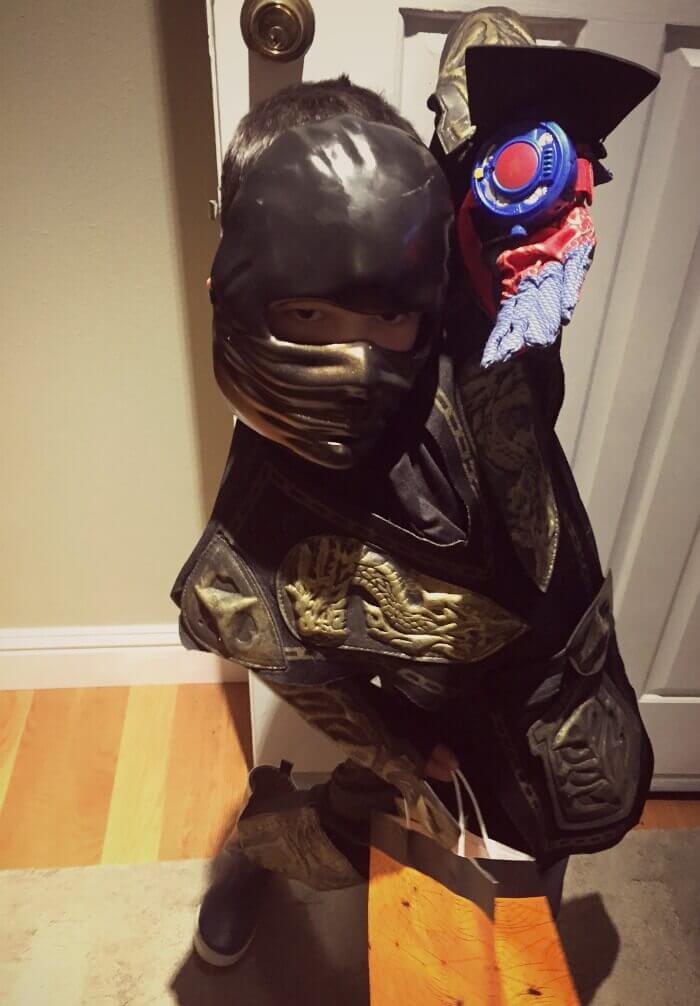 What the adults thought:

It was genius. She scored huge amounts of mother-in-law points.

Our kids still ate a few pieces of candy each. We didn’t force them to trade everything, but left it up to them. Since they wanted to have as much candy weight to redeem as possible, they chose their candy for eating very carefully and only kept their favorites.

I think letting them choose a few keepers to eat helped them feel like they weren’t being deprived, and yet as my daughter Abbie said above, I would never have let them eat all of that candy, so they really ended up with the best of both worlds.

This year I think we might be slightly more intentional about coming up with toys that really suit each child/age/gender in particular. Last year was more of a last-minute idea, so Grandma picked out of what she had on hand to make it work (and it was still a definite hit). If we had a few items that we knew our kids particularly loved, it would be a total no-brainer for them.

Mommy and Daddy may also have dipped into the trade-ins once or twice. I’m just saying. (But actually, most of it we turned around and put into the candy bowl at the front door for the other neighborhood kids that were coming by. Let’s call it recycling. 🙂

How do you cut down on the candy your kids eat, while still allowing them to be part of the festivities? 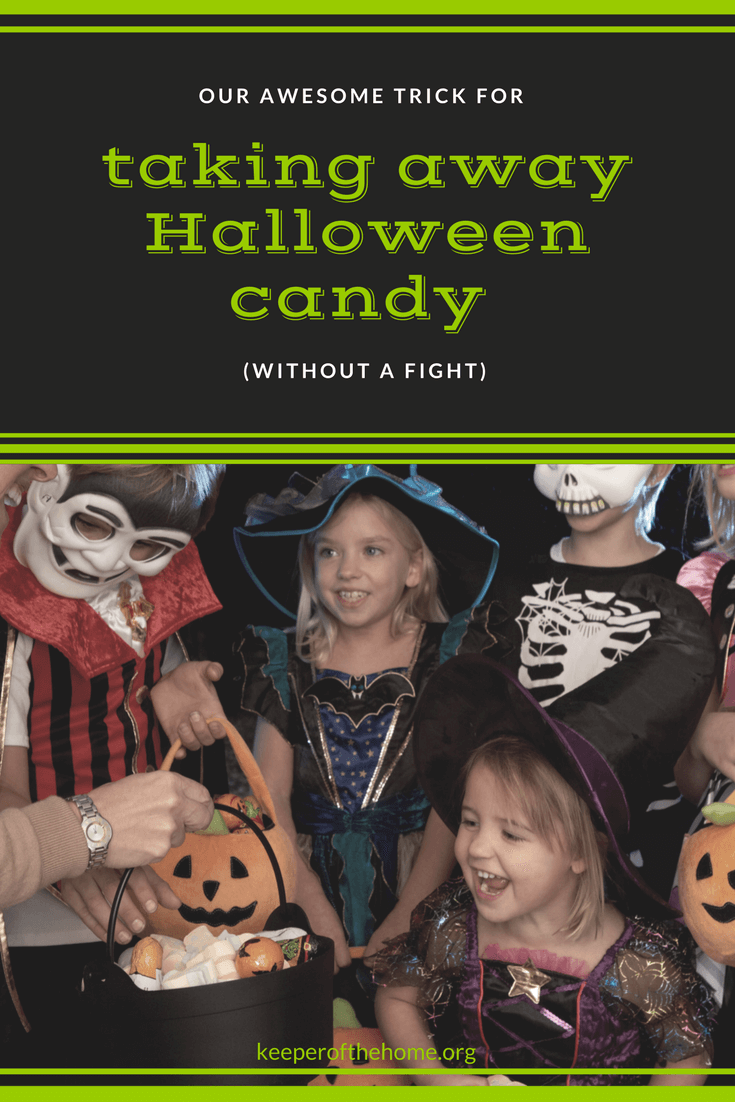 Simple Steps for Creating a Natural Medicine Cabinet
Next Post: How to Make Garlic Ear Oil to Treat an Ear Infection