You are here: Home » Blog » Natural Living » Attitude Towards Sugar 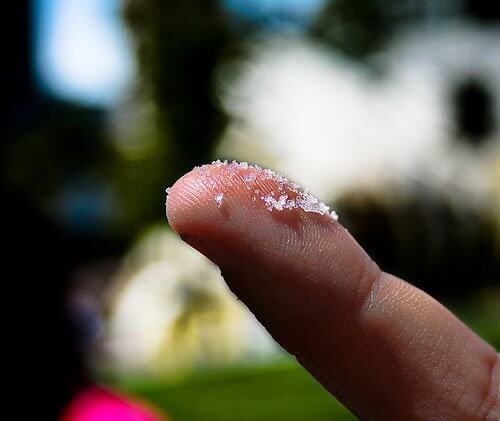 Back when I used to eat SAD (Standard American Diet, for those not familiar), I tried to make the “healthiest” choices wherever I went. So, if we happened to be getting fast food (not a rarity growing up), I would choose grilled chicken and salads over burgers and fries. My mentality was that I wanted to choose the best all the time, or at least most of the time – there was the occasional treat!

Small note: I remember I’d have a couple weeks of “perfect diet” where I’d eat little to no fat and tons of lean meat and veggies, and I’d end up feeling weak and sick. I concluded more than once that my body needed fat, although at the time I had no idea why. Hmm…now I know!

Once I started eating NT, though (which was largely spurred by my daughter’s allergies and other food issues), my perspective shifted a bit. I struggled between wanting to maintain a perfect diet and wanting something easy.

Fellowshipping also played a role: I felt that it was more important to share a meal with friends, even if my choices weren’t perfect. My feelings about food were compounded by both the way I’d eaten growing up and the fact that due to my daughter’s issues that we had to be so strict for a time that when we were finally able to relax, I went a little nuts.

We were dairy-free from July ’09 until March ’10. We were gluten-free from October ’09 until January ’10, when we were completely grain-free until March ’10. We were also free of nuts, seeds, and legumes. We were on GAPS for the first few months of ’10, so we were also completely sugar free. It was a struggle to only be able to eat meat, certain vegetables, and some fruit. I missed my nuts and beans and other “GAPS legal” foods that my daughter could not handle.

So in March ’10, when we got our raw dairy for the first time, and began sprouting grains, a whole new world was opened up for me. I also realized that my family did okay on white flour (since the phytic acid is in the bran and white flour doesn’t contain it), which was nice to know if we were in a pinch (such as out to eat with friends). I had missed all the treats I used to have: bread, cheesecake, cookies, ice cream…. I wanted to sample them all (again)!

Realizing all of this strengthened my resolve to get rid of the sugar in our home again. We now only eat treats at home (except very, very rarely; certainly not a few times a week like before!) and we use only sprouted flour, sucanat, raw honey, raw milk, and other nourishing foods in creating these treats. Raw milk ice cream is a favorite here, and it contains so little sugar that I make it very often (those used to store-bought ice cream say it doesn’t taste sweetened at all, but rather just like ice-milk). This helped; we felt better.

The problem with my attitude, however, remained. I no longer indulged in sweet treats when we were out, but I still would get bread, fried chicken, fries, etc. I figured “it won’t hurt sometimes; we have to eat!” As long as we were eating okay at home, it didn’t matter. But then it started to be that the “treats” were happening a couple times a week. Ideally diet should be good 80 – 90% of the time, and when I was going out multiple times a week I was no longer achieving that ideal.

My attitude had to change.

I realized that every meal is a chance to nourish our bodies. And that in some cases it’s better to not eat than eat junk (for example, if you’re out running errands and tempted to pick up fast food…you’ll be home in an hour, so waiting to eat is better than choosing junk). I decided that I did not want to put junk into my body or my kids’ bodies. I needed to plan better and choose the most nourishing foods as often as possible so that we would always be healthy.

Part of my attitude change was sparked by my realization that I was suffering from mild adrenal fatigue. I was starving and craving butter and salt, I had trouble falling asleep at night, and I was often irritated for no reason. I wasn’t nourishing myself the way that I needed to because I was focusing more on my “need” to have treats than on my need to be healthy.

I made more changes in my family’s diet. When we went out with friends (and we still did), I’d either bring us some food from home, or I would choose a restaurant that had good options (Chipotle, Panera, and Whole Foods are all acceptable). I started adding raw egg yolks to everything, and plenty of extra pastured butter and sea salt too. I started making a homemade “sports drink” to help replenish fluids. I drank more kombucha. I took the time to stop and eat at home when I needed to, instead of skipping meals because I was busy caring for my home and children. I felt so much better! It sealed my resolve that every meal is a chance to nourish and we must make the best choices we can, all the time.

Having that resolve is key. No, your diet will not always be perfect. Yes, there will be times and situations in which fellowshipping or another activity take precedence over making sure your diet is “right.”

But if your attitude is “I am going to make the best of every meal given what I have” then you will have a good diet and you will be healthy. This attitude change has made a world of difference for me (I don’t even really like a lot of those treats anymore!), and I know it would for others as well!

What is your attitude towards choosing what you eat for meals and treats?

Cutting Down on Sugar: 21 Ways to Eat Less Sugar
Next Post: Boost Your Immune System For the Coming Cold Season Using Real Foods